Previously, we’ve analyzed crypto exchange tokens using the TVEV ratio – token value / exchange volume . The TVEV ratio compares the price of an exchange token to the traded volume on the underlying exchange. Conceptually, it’s not too far away from the P/E ratio which is often used when valuing equities.

After our last post, many of you reached out and asked us to analyze a wider array of exchange tokens, beyond just Binance Coin, Huobi Token, and KuCoin Shares. So, in this post we’ll have a broader look at centralized exchange tokens.

If you’re waiting for our analysis on decentralized tokens (such as 0x, Bancor, and Kyber), do not despair – we’ll share that one soon as well.

We took a sample of data from June 8, 2018 in order to get an overview of the TVEV ratio. As in our previous post, we’re using the total supply (not circulating supply) as the basis to calculate the market cap. Here’s the result: 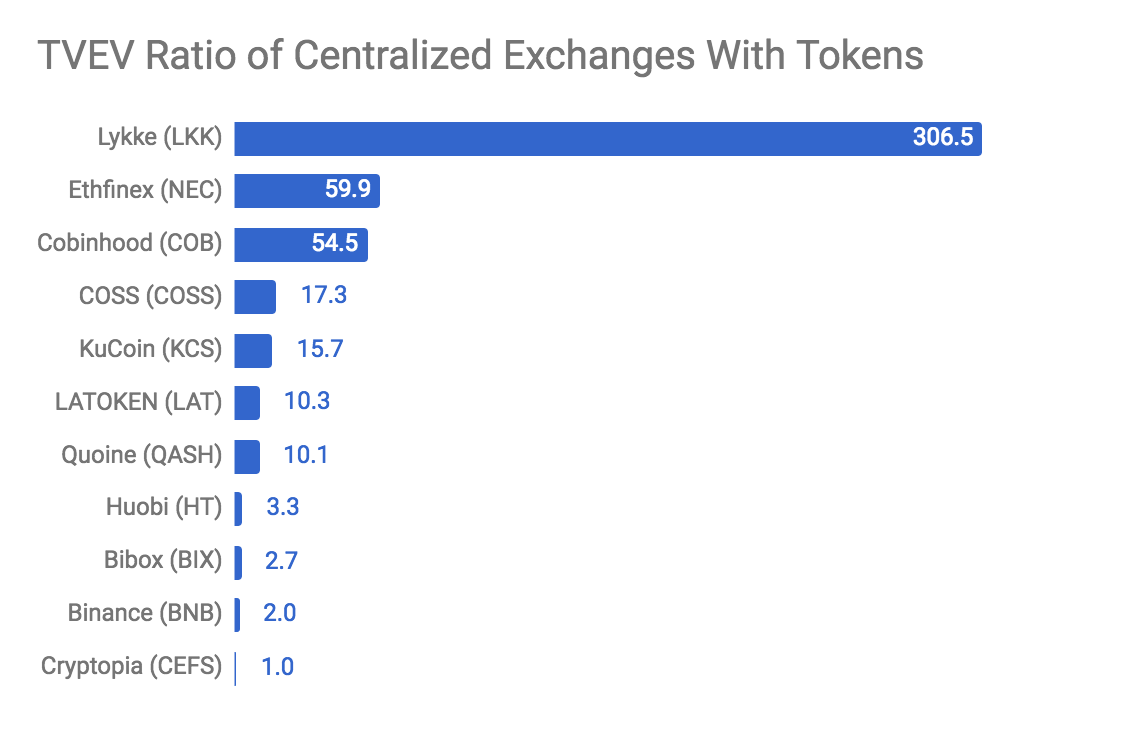 Again, these numbers are sampled for 1 day only, so the magnitude is more important than the exact number. Fortunately, the TVEV ratio per exchange token is fairly stable over time, as we saw in our last post.

Example of how the market values equity: Lykke (LKK)

The most extreme case on our list is Lykke, which is a small exchange whose token (LKK) actually represents equity in the company running the exchange. Specifically, 100 LKK tokens represent one share of the Lykke Corporation, which is a Swiss corporation. Hence, LKK is really in a different category than the rest of the list, and its TVEV ratio reflects that, sitting at >300.

The next two on the list have a high TVEV ratio, but the utility of these tokens is not linked to equity.

The first of these is Ethfinex and their Nectar (NEC) token with a TVEV ratio of around 60. Its main utility comes from the fact that every 30 days, Ethfinex sends 50% of all trading fees to an Ethereum smart contract, owned by Nectar holders, and traders receive an amount of NEC correlated to their monthly trading activity. This creates an incentive to first of all hold NEC tokens, and second to trade actively on Ethfinex. In addition, the NEC token can be using to vote on new exchange listings. 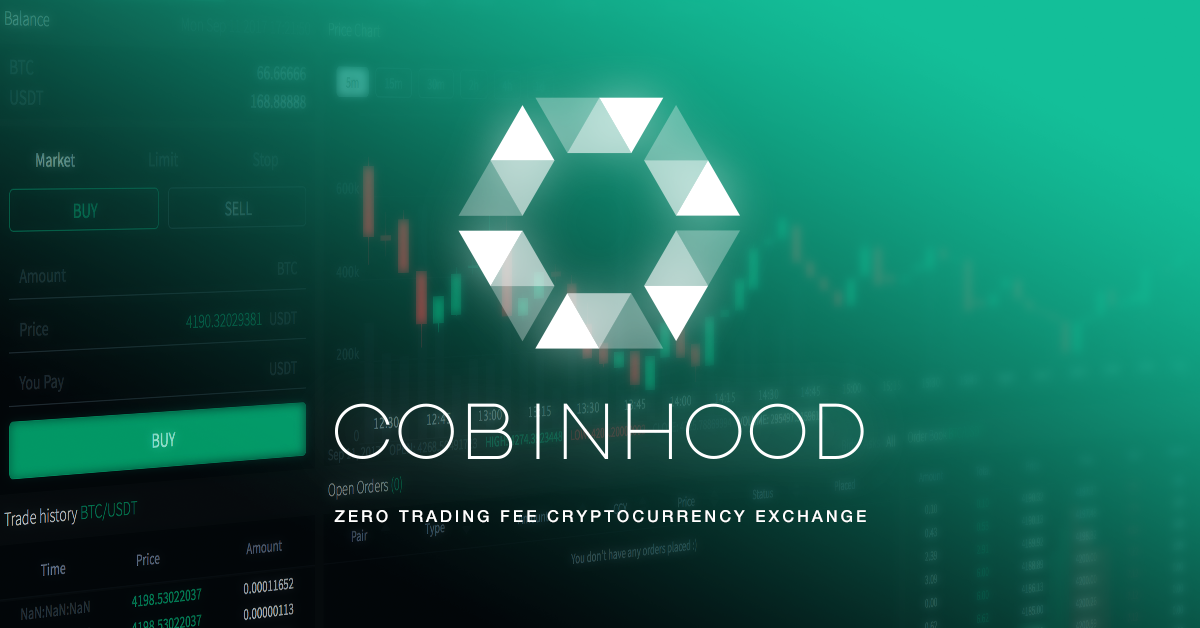 Cobinhood is the third on the list with a TVEV ratio of around 55. Cobinhood is a small zero-fee centralized exchange which has expressed a big vision of becoming decentralized (possibly explaining some of its high TVEV ratio). It’s not actually clear how the utility of the COB token is linked to transaction volume on Cobinhood, since to our knowledge they don’t have any discounts, buybacks, voting, or fee share.

The next exchange tokens on the list have a TVEV ratio in the range of 10 to 20.

The first is COSS, which was mentioned by quite a few of our readers on Reddit. It has a TVEV ratio of around 17. Similarly to Ethfinex and NEC, COSS shares 50% of profits via a smart contract – although this happens on a weekly basis rather than monthly. It’s interesting to note that COSS currently has such a low TVEV ratio compared to NEC, despite having a very similar utility models.

For a comprehensive attempt at valuing COSS, check out this Medium post by Dan Zuller.

KuCoin and the KCS token currently sits at around 15 on TVEV ratio. Since we already covered KuCoin in our last post, we won’t go into too much details here, but this calculator is quite useful to compute the returns you’d get for holding KCS. At the time of writing, KCS gives an implied dividend yield of 4.8%. 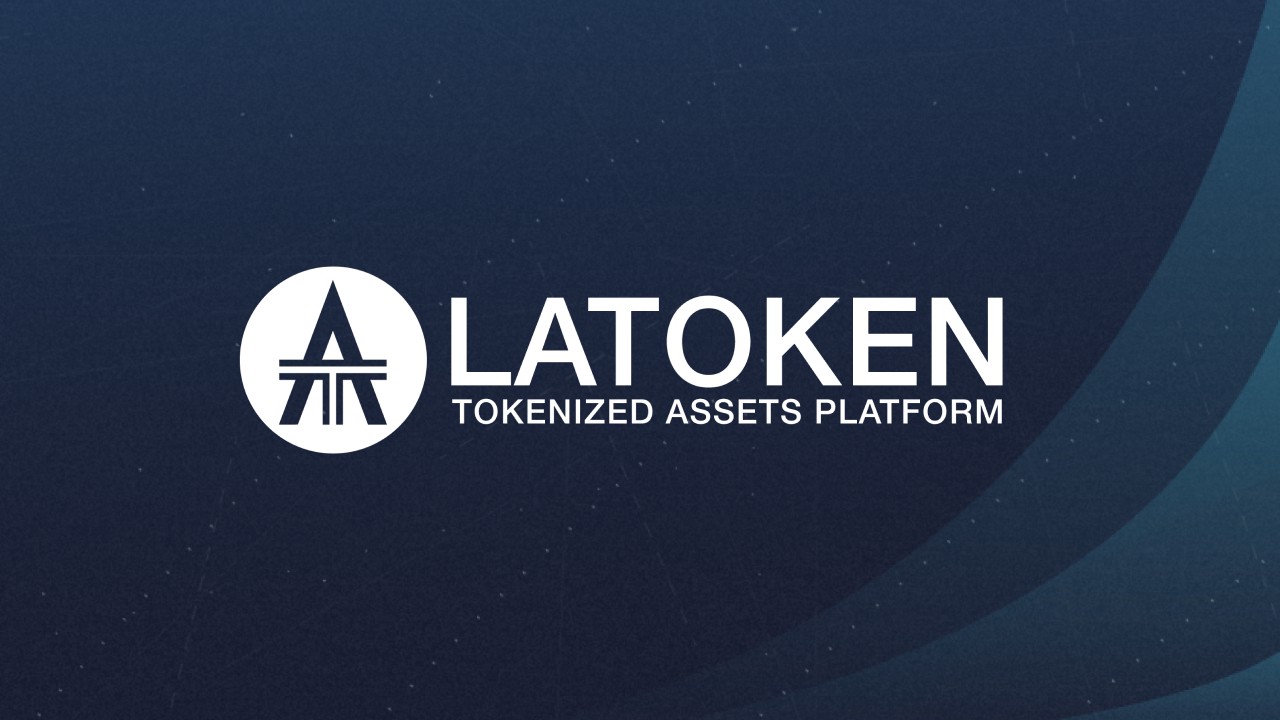 The utility model that LATOKEN (LAT) follows appears at first glance to be similar to the standard discount model that e.g. Binance follows, but it’s actually quite different. Instead of giving users a 50% discount for paying transaction fees with their token, you get a 50% discount when trading the token itself. For instance, if you’re buying ETH for BTC you’d pay a 0.1% fee, but if you’re buying ETH for LAT you’d pay 0.05%. Naturally there’s a big difference between this and the Binance model. Interestingly, LATOKEN has a much higher TVEV ratio than Binance – it makes BNB look cheap…!

The story with QASH is a bit more complicated than the rest, because it has associations to two existing exchanges (Quoine and Qryptos), but it is fundamentally linked to the upcoming Quoine Liquid platform. We’ve measured the TVEV ratio using only Quoine, giving it a TVEV ratio of around 10. If we add the Qryptos volume, it reduces the TVEV ratio slightly to about 8 – 9. Note that we might have sampled Quoine on a low volume day, as we’ve seen QASH at lower TVEV ranges on other days (as low as 5).

The next tier of tokens we move into all have a relatively low TVEV ratio, currently ranging from 1 to around 3.

Huobi (HT) has a TVEV ratio just north of 3. We also covered this one in our previous post, so we’ll just note that its main utility is linked to voting and discounts (albeit in a slightly more convoluted way than Binance, where eligibility for discounts requires you to keep buying HT every month).

BIX is interesting because the Bibox exchange has ~4X the volume of KuCoin, but a 20% lower market cap. The result is a TVEV ratio below 3 for BIX. Interestingly, their utility model is more or less a combination of Binance and KuCoin’s model.

Its discount structure gets less attractive on a yearly basis (similar to Binance), but it has a more aggressive burn model than both Binance and KuCoin, with 25% of net profits (EDIT: changed to 45% of trading fees, or 67.5% if you’re in the top 100 on trading volume) being burned quarterly until 60% of tokens are burnt. On top of that, 30% of net profits are paid to BIX holders through airdrops. KuCoin does 50% of revenues.

It’s worth noting that the difference between doing airdrops based on net profits rather than revenues is significant. Firstly, revenues will obviously (by definition) always be larger than profits. Secondly, it’s much harder to inflate traded volume for an exchange that has airdrops based on revenues.

The reason is that we can estimate the revenues of these exchanges based on traded volume: just multiply traded volume by % transaction fees. So an airdrop model based on revenues (like KuCoin’s) makes it hard to inflate traded volume without having to pay dearly for it through airdrops. Net profit, on the other hand, takes the exchange’s expenses into account, which we do not have direct access to.

For these two reasons, it should be obvious that an airdrop model based on revenues is vastly superior for token holders, all else being equal, and perhaps this explains some of the discrepancy between Bibox’ and KuCoin’s TVEV ratios. 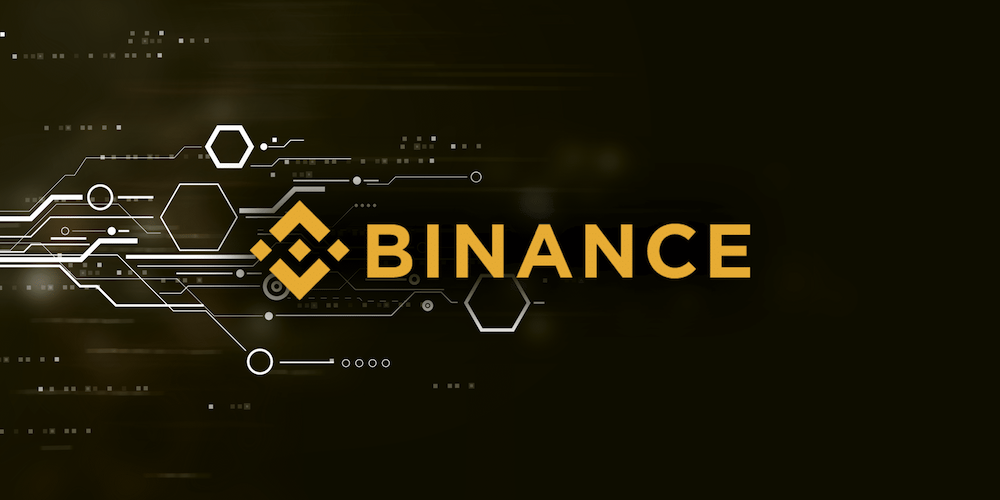 We already covered Binance (BNB) in our last post, but it is worth noting that it has the 2nd lowest TVEV ratio on the list, sitting at around 2. You could make a strong argument that it’s likely underpriced, but it’s also worth noting that its main utility (transaction fee discounts) will gradually decrease and hit 0 in year 2022.

If Binance is interested in keeping the price of BNB up, it’s not unlikely they’ll be adding on additional utility for BNB in the years to come. In fact, we have a recent example of this happening, when they announced a few weeks ago that accounts holding more than 500 BNB would receive twice as high referral fees.

If you want to read more about Binance / BNB, definitely check out this analysis where our Head of Crypto Research, Jonney Liu, values BNB using implied cash flows. His conclusion is that Binance could massively boost the BNB token price by making one change to their token model.

The New Zealand-based exchange Cryptopia has a token which is somewhat unusual with its low total supply of only 6300 CEFS tokens. Of course, the number of tokens is somewhat arbitrary, but it does have the effect of giving it a high token price (>$1000 per CEFS). You could speculate that investors might conclude that it’s overpriced because of this. This logic is of course flawed.

Similarly to KCS, we can calculate the implied dividen yield using this site. Currently the yield sits at 8%, which is quite a lot higher than KCS.

We’ve summarized the token models in this table for your reference, where the tokens are sorted by TVEV (high to low).

Please note that exchanges sometimes make minor modifications to their utility models, so if you’re looking at a specific exchange token, please do your own research to make sure you have the latest version.

If you found this article useful, please let us know and share it with your fellow crypto traders.

Next up we’ll look at decentralized exchange tokens. Stay tuned!