The questions on everyone’s mind are:

In this research piece, we will examine the drawdown history in BTC to see how this recent “long winter” compares to corrections in the past, and furthermore, we will compare this drawdown with drawdowns during the tech bubble to see if we can gain useful insights.

The data we use for this piece will be BTC closing prices since Oct 2012, and NASDAQ Composite (the main benchmark for tech stocks) closing prices from 1996-2004, which encompasses the “tech bubble” period.

I know, I know, multiple articles out there have already made the comparison between Crypto and the NASDAQ Tech bubble, but here at CoinFi we wanted run this comparison for ourselves, and also take the analysis one step further to see if we could come up with new insights to share with you guys.

First, let’s start with some basics.

What is a Drawdown?

A drawdown in any asset is defined as the %price change from peak asset price to the bottom.

So without further ado, here is a list of the notable drawdowns for BTC, starting with the largest:

Bitcoin VS. The Tech Bubble

Let’s see how the NASDAQ Composite drawdowns looked like during the “Tech Bubble.”

So what does this info tell us?

Despite the fact that people frequently draw comparison between the two, the drawdown behavior between the NASDAQ tech bubble and BTC are not that similar.

Specifically given the decentralized nature of speculation and lack of institutional backing in Crypto vs Tech stocks, comparing the 2 is akin to comparing apple to oranges – despite the convenient narrative of bubbles in general.

The big difference unfortunately is the relatively slower recovery period. With the “Recovery to Trough Ratio” at 1.69 for BTC and 111 days peak to trough for the most recent drawdown, we can imply simply that it may take another 188 days from the low before we might near the 20K level again.

So according to this analysis, it might not be till mid October till you see your money back if you bought at the high, which is a lifetime in the crypto world!

Diving Deeper Into the Analysis

While the analysis above leads to some interesting findings, there are some caveats to consider:

To counter the above points, we have extended the analysis to examine not only peak to trough drawdowns, but also local minima and maxima – which gives us more data points.

The graph below will give a better idea of the points we are looking at: 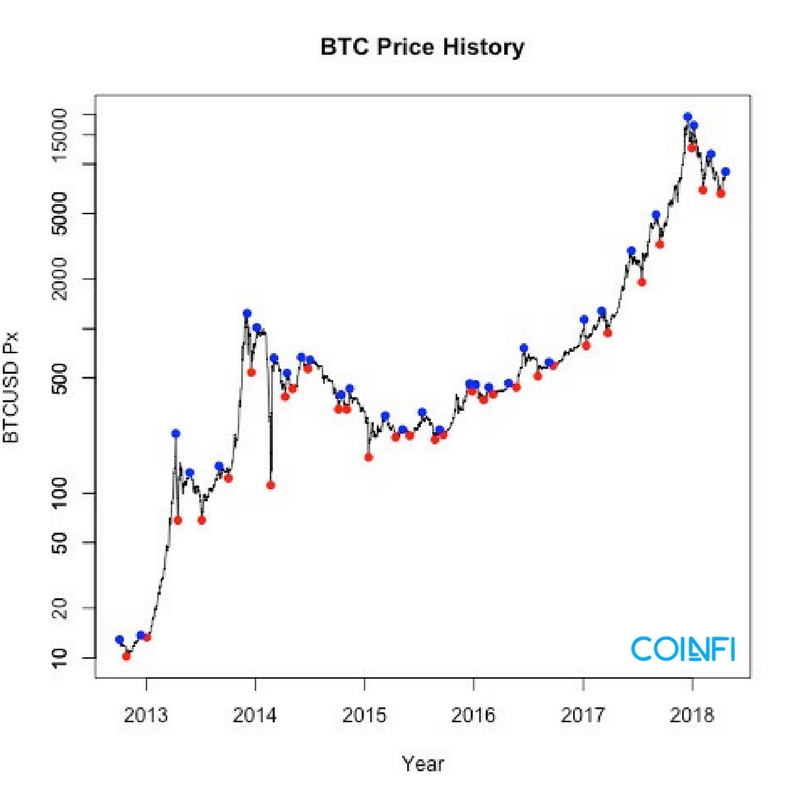 In the above graph, the blue points reflect the local peaks (maxima) and the red points represent the corresponding troughs (local minima).

We can do the same deeper analysis for NASDAQ during the tech boom to see how it compares. 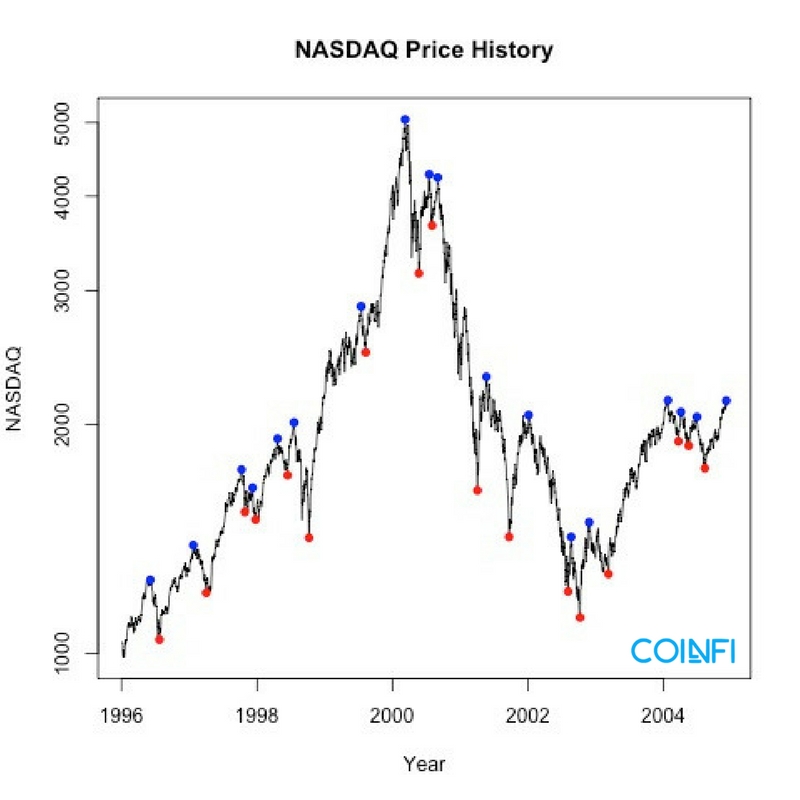 In an ideal world, we would have more data points and conduct some significance testing, but it is clear that BTC drawdowns are sharper and faster than drawdowns during the tech bubble, but also take a shorter time before we reach a new peak.

Many have attributed the recent price recovery to the end of the tax season. While this recovery is certainly promising, and the crypto world is seeing positive developments such as increased institutional interest in the crypto world, I would caution our fellow readers that it may still be a bit longer than a few weeks before we see cryptos reach its former highs, but in the medium term the prospect is looking bright.