Like most of the ICO space, the CoinFi team follows the work of Ian Balina – a massive influencer with hundreds of thousands of followers across Telegram, Youtube, Twitter and Facebook. His endorsement is widely believed to have a huge impact on the success of an ICO.

Most people in the ICO space would agree that at this point, a positive mention by Balina gives a lot of exposure for an ICO. But what is the impact of an Ian Balina mention? Read on to learn how we quantified the Ian Balina effect.

Using data collected by CoinFi and ICO Whitelists, we inspected Telegram growth rates for a sample of 15 ICOs. These were ICOs that Ian Balina mentioned – either on Twitter, YouTube, or Facebook.

In 80% of the cases, we found that an Ian Balina mention was followed by a notable change in growth of the Telegram groups. Here’s the full list of ICOs inspected: 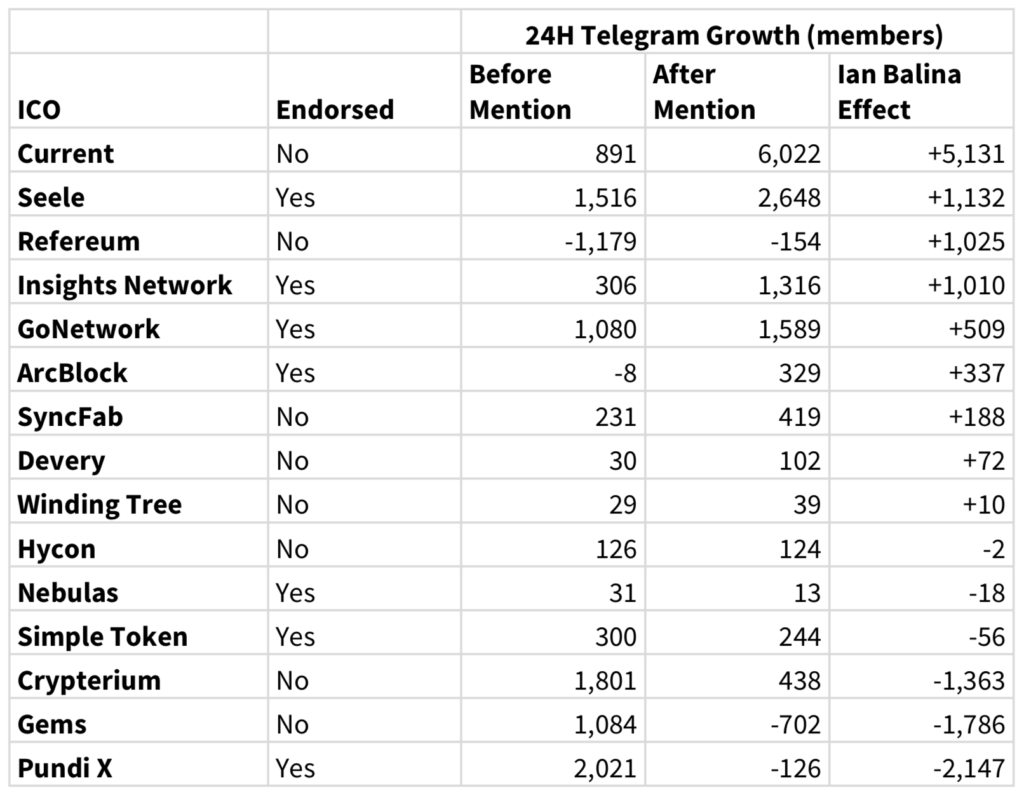 In most cases, the Telegram growth accelerated after a mention, as the below examples for GoNetwork and Insights Network show (y-axis is 24-hour member growth in Telegram group).

Interestingly, in the small set of ICOs we inspected, there was no correlation between Balina’s verdict of the ICOs and the direction of the growth. Here’s an example showing him passing on Current: 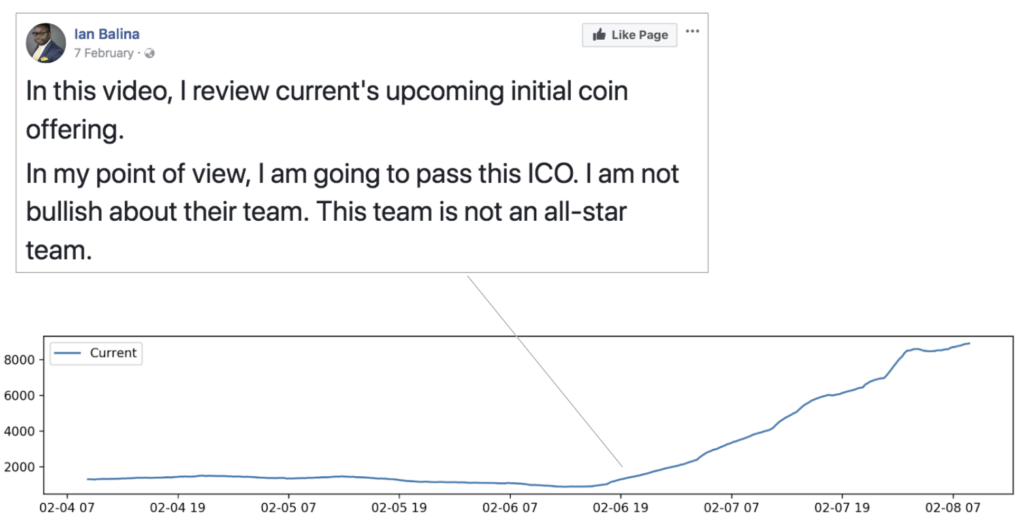 As you can see, Current’s growth rate increased after Balina’s mention – despite the negative sentiment.

Of course, we should be mindful of not confusing correlation with causation. In some cases, Ian’s mention coincides with other events that are impacting the Telegram growth. An example of this is in the case of Seele:

There are also examples of negative growth happening right after a mention, as in this case with Gems:

In our dataset, this occurred less frequently than positive growth though. In fact, an increase in Telegram size shortly after a Balina mention was twice as likely as a decline in group size.

In conclusion, Ian Balina is measurably a powerful force in building hype around ICOs. His mentions are frequently accompanied by strong growth in ICO communities.

More generally, this shows how the output of a prominent influencer in the crypto space can represent a strong signal for where the market is moving. Given that growth movements seem to move independently of Ian’s verdict, his followers might be taking his advice of “doing your own research” seriously.

This analysis was done using Telegram growth data collected by ICO Whitelists from October 2017 to early March 2018. We joined the Telegram data with CoinFi data on ICO mentions by Ian Balina in the period June 2017 to March 2018.

The 15 ICOs included above are a small sample set that represent 10% of the ICOs mentioned by Ian Balina. Given the small amount of data, it’s important to take these findings with a grain of salt – consider them anecdotal evidence rather than findings with statistical significance.

As CoinFi continues to build out systems to ingest and analyze large datasets, we’ll be able to further isolate and identify new actionable trading signals from this type of exploratory analysis.