Binance’s margin borrowing amount has crossed $100 Million. Further, Binance’s new version of its app, with support for lending has been rolled out to select users. It will have 100% coverage by Friday.

Much to Benefit of Margin Traders

Per a recent tweet by Changpeng Zhao (CZ), CEO of Binance the margin borrowing amount has crossed $100 million. Binance’s increasing popularity as a margin trading platform is likely to put it in direct competition with BitMEX.

Moreover, the new version of the app will also be an added advantage to margin traders. 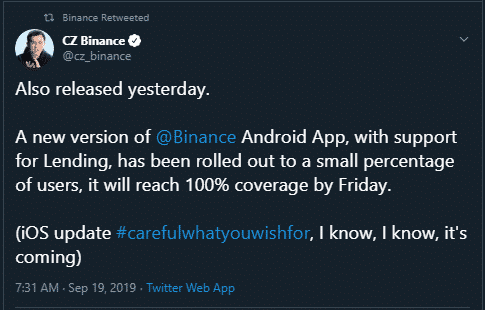 Recently, Binance added margin trading pairs for Dash and Z Cash. Also, Binance has added Monero(XMR), ZCash(ZEC) and Dash(DASH) to the fifth phase of the lending program with annual returns of 3.5%.

Yesterday, Binance opened registrations for its new arm, Binance.US.  The leading exchange has stood by its promise of facilitating digital asset adoption and has offered zero trading fees for trading activities till the 1st of November. 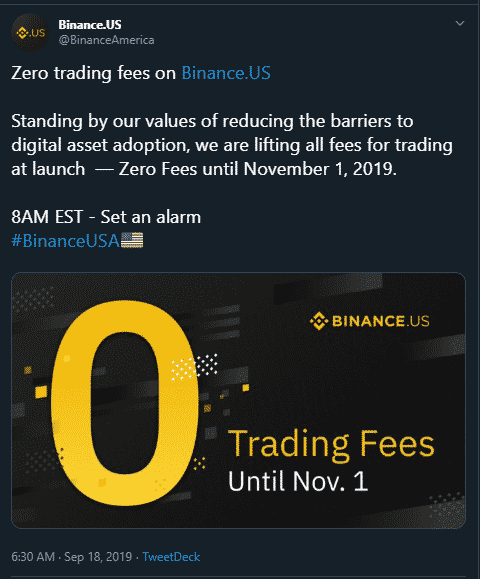 While Binance keeps expanding and introducing new features and products, like Binance Jersey, futures trading, the new lending platform, and the popular Binance Decentralized Exchange, Binance DEX, it has not made trading support available in Texas, New York, and Florida.

Is Binance Lacking on Innovation?

Well, even with so many developments to its name, it is not all glorious in the Binance sphere.

Few days back, CZ, announced on Twitter that someone had tried to attack the Binance futures platform. Later, he declared the attempt to be unsuccessful because Binance futures’ liquidation was tied to index price and not futures price. Furthermore, per his claims tying liquidation to price index was Binance’s innovation.

However, his claims fell flat as a Twitter user, @lowstrife replied to CZ’s claim by pointing out that liquidation tied to index prices was an exchange feature that had existed on BitMEX for a long time. While no response was received from CZ ,  Arthur Hayes, CEO of BitMEX, took a dig at CZ offering him classes in “advanced copy-pasting” for running a crypto derivatives platform in exchange for 51% of CZ’s equity.

Is Binance trying to establish new benchmarks and compete against the margin trading giant BitMEX with all these developments? Let us know what you think?