Libra Claims it is Not an “Investment”; 2020 Launch Fixed Despite Regulatory Hurdles

The controversial Facebook cryptocurrency project, Libra, posted on Twitter today that it has been designed to deliver utility to users in their everyday lives and it is not an investment. The project is still expected to launch next year as scheduled as per Libra’s boss, David Marcus. However, Marcus also stressed that the project’s development team is ready to follow procedures in order to ensure that all regulatory demands are met before the launch date.

Designed to Deliver Utility; Not a Vehicle of Investment

Per a tweet today, Libra’s purpose is to deliver utility to users in their everyday life and not be a vehicle of investment and investment. 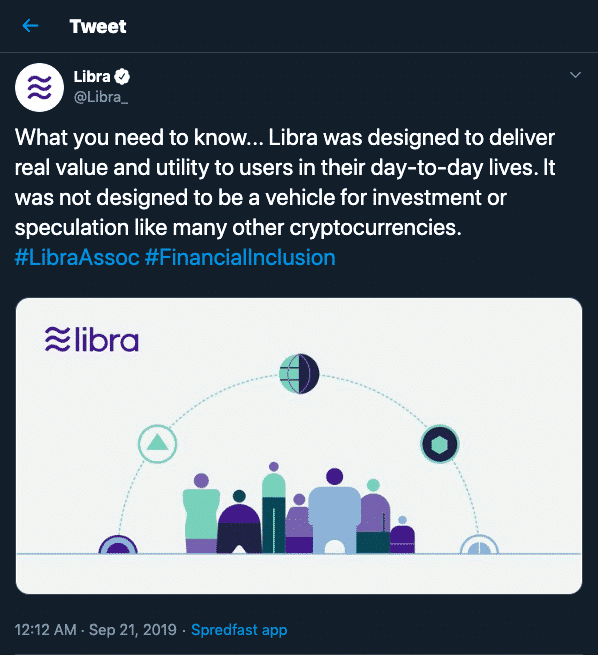 By saying so, Libra has tried to differentiate itself from cryptocurrencies, which, at present, are largely used for speculative purposes and are majorly unrecognised by regulatory authorities across the world. However, it seems that the community is not convinced of Libra’s apparent noble intentions. Here are some of the comments from Twitter users – 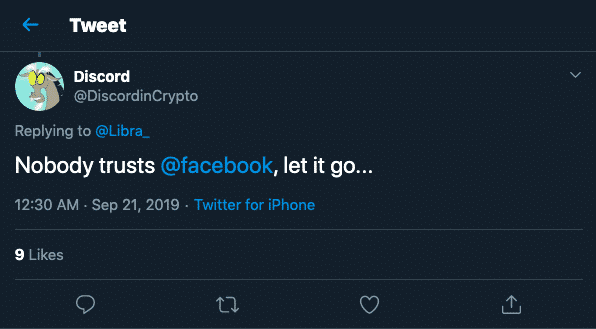 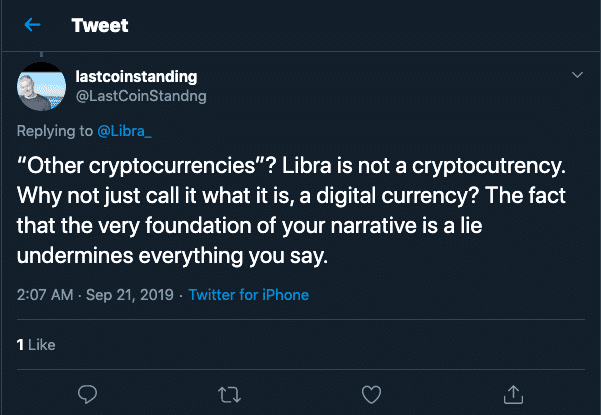 Despite all the backlash that the project has faced from global regulators, it is still firm about launching next year. According to an interview with Swiss Newspaper NZZ on recently,

“The goal is still to launch Libra next year,” Facebook’s David Marcus told NZZ in an interview published on Friday. “Until then, we’ll need to address all questions adequately, create a suitable regulatory environment.”

As per a report by Financial Times, a group of officials led by The European Central Bank’s (ECB) Benoît Coeuré representing 26 central banks met with Libra officials in Basel, Switzerland, on the 16th of September to question Libra’s currency’s “scope and design.”

Libra May Never Be Launched In Many European Countries

Responding to this event, Libra expressed its readiness to respond to questions put to it by this team of regulators and politicians while also insisting that a far project launch date was initially slated for Libra in order to attend to every regulatory requirement and also to achieve project modification which based on feedback before eventually diving into the financial ecosystem.

As governments around the world are closing their doors on Libra, it has become evident that Libra might never get a chance to thrive or be implemented in certain regions, particularly in Europe. According to David Marcus,

“It’s unlikely in any case the people will pay for an espresso in Switzerland, Germany or France with libra in the future,” he said. Initially, he added, he expected user acceptance to be a bigger problem than regulatory issues.

Given the kind of regulatory scrutiny and opposition Libra is facing, the 2020 launch date given by David Marcus appears over-optimistic. However, it is worth noting that Libra is accelerating its efforts to overcome regulatory hurdles – it recently appointed John Collins, former head of policy to manage “issues related to blockchain policy.”

Do you think that Libra will see the light of the day in 2020? Share your views with us in the comment section!

The post Libra Claims it is Not an “Investment”; 2020 Launch Fixed Despite Regulatory Hurdles appeared first on Coingape.